Faith: It’s Not for the Weak

Posted on January 7, 2016 by stacyandjohn

When Stacy and I left on our trip to The Holy Land, we were in two very different phases of our spiritual growth.  I will not name her stage, as it is far beyond me and, more than likely, it is rude to name another’s spiritual position on the Monopoly board of God.  But as  for me, I was in Jail, I could not pass go, I could not collect $200, and I wasn’t sure what to do about it.

Then, we went to Israel.

I had been reading the Long Discourses and the Short Discourses of The Buddha, two of the four major sacred texts of the Theravada Buddhist faith. And they’re goofy as hell.

That’s overstating it, of course. But it was far from the constant shower of wisdom I had expected. They were repetitive, conflicting, weird, polytheistic, and established that the Buddha had forty teeth, a sheath over his genitals and could rub his knees with his hands without sitting down.

All of a sudden, I had some doubts about my faith.

I had been drawn to Buddhism by its common sense approach to life.  All attention was focused on the problem: me. Heaven, hell, God and the Devil were things that didn’t matter. Life here on Earth mattered, and what you did here mattered. There were no long, drawn-out discussions about the Psychological gender of the Holy Spirit or how many dead Popes could dance on the Head of a Bowling Pin. No impossible miracles, no magic tricks, no unearthly creatures or realms . . . nothing which required a leap of faith. 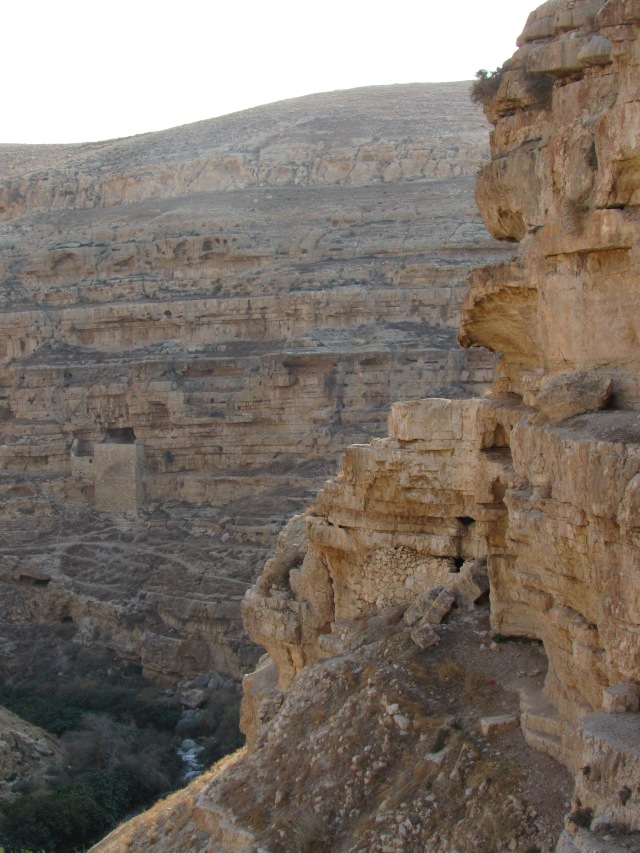 And that’s what my problem was. Faith. Faith:  that odd word, that bizarre concept, that essential aspect to any well-lived life. It was a thing I never had. Something I had proudly eschewed my entire life. And now it was being asked of me by a man 2,600 years dead. He wasn’t supposed to do that. He had a plan, I follow it and then get all happy and shit. That was the deal. That’s what it was supposed to be!  Just “eightfold path” this and “four noble truths” then meditate a lot and Blam!  Nirvana, baby!!

Can you hear the Buddha laughing?

The truth I discovered was that as a human I have no reason to expect a simple solution.  The answer will need to handle all the convolutions that our psyche will fling to avoid it.  Problems are strong, pain is powerful, and the world is built on a foundation of suffering that feeds on itself and attacks us every day.

This was what Israel taught me: that place where Nationalism and Religion collide headlong, forcing all people there to act on their Faith.  I mean people who had given up all hope of comfort and luxury for ideas like family, Allah, Jehovah, and Home. Getting to know these people made a lot of concerns I thought important melt away, leaving only the essential.

The deeper I descend into Buddhist doctrine, the deeper into myself I also go, and it is a sticky precarious place. I will need help understanding these hard places, which is where those odd passages come in. Who knows what the stuff about 31 realms of existence or all the angel/dryad-like “devas” will yield to me.  But the Buddha’s done right by me so far, and I have a powerful streak of dumbass in me, so I will have faith that he knows best. (By the way, I did find a meaning to the passage about the “sheathed genitals, hands on knees and forty teeth” that gave me great insight.  But that insight is mine, and it is not proper to share it. Your insight might be different, and I joyfully leave that blessing for you.)

Now there is a backbone to my meditation that wasn’t there before.  I sit longer, and apply my lessons more times throughout the day.  The Buddha did not hold up a contradiction to me, he held up a mirror.  And that is why I recoiled.  Religion is easy; the “self” is the hard part.

She is an Episcopal priest, He is a Theravadin Buddhist trying to be a playwright. They blog together, on their religions, their relationship, other religions and about breaching the chasm between Niravanas and Heaven.
View all posts by stacyandjohn →
This entry was posted in John, Uncategorized and tagged Buddha, Buddhism, Faith, Prayer/Meditation. Bookmark the permalink.